The classes will be held at the Elmore County Extension Office, on Thursdays, from August – November, 9:30AM until 2:30PM, with a light lunch provided. The fee for the class is $150.00 to be paid AFTER acceptance into the class by letter from the County Agent and BEFORE the first class. Graduation ceremony will be the following August.

Hosting the classes will be the Central Alabama Master Gardeners Association [CAMGA] – a very active group of gardeners who have contributed thousands of hours of volunteer service to Wetumpka and surrounding communities.

For further information, please click here or call the Elmore County office at 334-567-6301.

The equipment you need to produce a decent teaching video may already be in your pocket or purse. Today’s smartphones have remarkable video capabilities and decent onboard microphones, so don’t be afraid to get started using your smartphone. Here’s a page with some specific tips for shooting video with an iPhone, and here’s one about using an Android phone. Make sure you always shoot in landscape mode (with a horizontal screen rather than a vertical one) and that you stay nice and close to anyone whose speech needs to be heard. For your first video, a smartphone is a convenient and serviceable option.

When you’re a tad more ambitious, we have some great equipment that will give you more choices.

We own a Canon Vixia HF R600 camcorder. Its 64 GB SD card holds several hours of HD video. It has two batteries, each of which lasts about two hours. You can read its owners manual here.

We also own a Zoom H2n digital audio recorder. This is a sweet little recorder with five onboard microphones plus an input for a lavalier microphone. It has a 32 GB SD card that will allow it to record several hours of great-sounding audio. You can read the manual for the Zoom H2n here.

Rounding out our equipment package are a floor tripod and tabletop tripod, accessory cables, earbuds to monitor sound while you shoot, an SD card reader, and a case.

Back: Editing Your Video

Next: Using the Zoom H2n For Great Audio on Your Videos

The built-in microphone on the Canon Vixia HF R600 is surprisingly good. If you’re speaking within eight feet of the camera, if the wind’s not blowing, and if there’s not a great deal of noise nearby, the quality of the audio should be just fine. Sometimes, though, you can’t count on all those “ifs” to be true. Does that mean you can’t shoot? Honestly, if this is your first video, it probably does. There’s enough to think about on your first video without having to worry about a digital audio recorder, so it probably would be better to wait until conditions improve.

Once you have a couple of videos under your belt, though, don’t let a little challenge like wind noise or distance from the camera deter you from producing a great video. That’s why we have the digital audio recorder. Follow these simple steps, and you’ll have great audio to go with those beautiful pictures even when conditions are difficult.

Use the camcorder’s microphone too

You don’t need to do anything to make this happen, because whenever you shoot video with the Canon HF R600 it will record audio with its onboard microphone. And you may find for any number of reasons that the camcorder’s microphone is better for some or all of your program. It’s a great insurance policy.

The Zoom H2n is a high-quality recorder, and it’s extremely sensitive. Unfortunately, that sensitivity extends to the case; if you touch it or rub it in any way while it’s recording, you’ll hear it on the recording. You can easily prevent handling noise either of two ways:

Set the gain on the H2n

The camcorder’s audio volume will be adjusted automatically for the best sound, but you need to do it manually with the H2n. While your talent is speaking from the same distance and at the same volume as will be used when you record, adjust the audio gain on the side of the H2n until the signal peaks reliably at or near -3 db. If possible, keep an eye on the meters while you’re shooting to make sure you’re still shooting at about the right level.

The Canon HF R600 will automatically synchronize its audio with its video, so you won’t need to worry about it when you use the onboard microphone. When you use the H2n, though, the audio signal produced by the H2n will need to be synchronized with the Canon’s video for you to be able to use them together. The easy way to do this as you are shooting is to remember, every time you stop and restart either the camcorder or the H2n, to create an audio slate mark. With both the camcorder and the digital audio recorder running, use short, staccato syllables to say “1, 2, 3, Mark!” These short syllables will be recorded on both the camcorder’s audio and the H2n’s audio, and you’ll be able to use them in editing to line them up with each other.

If you have an editor that provides visual waveforms for audio files, you can line them up visually. If not, you can synchronize them using the technique described in this video. Make sure you view it full screen and using the highest resolution. After the video and the audio are synchronized, you can vary the volume of the camcorder and the H2n as you see fit to get the best, most useful sound.

Camga owns a tiny but excellent quality lavaliere microphone. You’ll find it in the pill bottle in the front pocket of the video equipment case, and it plugs into the receptacle on the side of the Zoom H2n that says “LINE IN.” Set the H2n on XY, and don’t worry about the fact that the signal shows up on only one channel; that’s the way it’s supposed to work. You can place the H2n in the talent’s pocket and thread the lavaliere microphone cord up through their blouse or shirt so that the only thing that shows is the microphone itself, clipped onto the talent’s clothing. The microphone works fine without the black foam windscreen, but please leave it on so we won’t lose it. 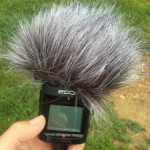 Next: Using Your Smartphone for a Safety Shot