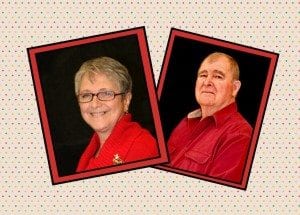 Pat Farmer is the newly elected President of Chilton County Master Gardener Association for 2015. CCMGA appreciates Pat for stepping up to fill the President’s position. So let’s get to know Pat and Jerry…..

Pat and Jerry Farmer have been married for 30+ years, have a blended family of 4 children plus lots of grandchildren and share a love of gardening and Master Gardeners.

Both Pat and Jerry have been valuable additions to CCMGA since 2010. Not ones to sit around, they chaired and co-chaired the CCMGA Demonstration Garden in 2011, after helping with it the year before under Audrey and Lamar Giles’ leadership. Jerry co-chaired the Demo Garden in 2013-14 with Alan Reed. Pat held the office of Secretary in 2011-12 and then Vice President in 2013-14. She also chaired the Helpline Committee in 2014. Pat retired from a management position with a magazine distributing company and brings lots of experience to her new position as President.

Growing up, Jerry helped with his father’s vegetable garden and his mother’s flowers. He continues each year to have a vegetable garden. Pat enjoys house plants and growing patio tomatoes in large pots. While Pat favors sitting outside on the back porch watching the change of seasons, Jerry likes piddling in his workshop and potting area.

Pat likes to watch things grow such as avocado pits that she sprouts and roots. Jerry likes to enjoy his vegetable garden all year long by canning and preserving his garden bounty. When they are not gardening, Pat enjoys reading and baking. Jerry enjoys reading and working puzzles.

The Farmers’ landscape is planted with plants like Forsythia and Wisteria, fruit trees and low maintenance flowers. Or as Pat says, “the yard is constantly a work in progress…we grow outstanding weeds!” Pat takes care of the inside plants and Jerry spends an average of 20 hours caring and maintaining the garden and yard in the growing seasons.

Something you might not know about Jerry; he was in the United States Marines and worked as a air traffic controller. He also had a remodeling business while living in Chattanooga and enjoys the projects he and Pat complete around their home. There was a time during Pat’s youth when she was very shy and was terrified of speaking in public. Well, we know she overcame that problem! She also flew a 2 engine plane from Pensacola to Tallahassee not long after her very first flight in her twenties.

Jerry’s words to live by are: “Be yourself, everyone else is already taken”

Pat’s words to live by are: “When one door closes, another opens; but we often look so long and so regretfully upon the closed door that we do not see the one which has opened for us.”  Alexander Graham Bell

Jerry and Pat enjoy the fellowship and sharing between CCMGA members and volunteer opportunities that include children.